So I mentioned before that I'd been contacted by time travelers.  I wanted to do a follow-up on the latest developments, and it needed a bit more space than FB really allows...  Viva ForBattle!

(Once more for the uninitiated; if you know the truth behind all this, please refrain from telling me.  I'm carefully avoiding googling any of it, because frankly I'm enjoying the ride and don't want to spoil it.  I'm actually feeling a little bad about spoiling it for you all instead of signing you up for it, but I figure it's a little late now...)

So back in December, I got a letter claiming to be from a law firm representing my great uncle Sherman Moser.  Which would have to be a heretofore unknown brother of my father's father.  They said that I had inherited something from his estate which they would send along shortly, along with some letters from one of their other clients.  Sounded a bit like a scam, but whatever.

Then earlier this month I got another packet from the same firm, with a bunch of letters.  These letters were dated and postmarked at various times between 1942 and 2010, and were written on the backs of what appeared to be period documents.  They all fit together as pieces of a single tale: a time traveler was lost in time, and his partner was searching for him.  She needed to know when exactly he was in order to be able to fetch him back.  The information she needed was encoded on some sort of map, which would be left to me by my great uncle.  All I had to do was keep the map and hand it down to my descendants, and she would pick it up from them later to get the info she needs.  (Might perhaps have done better research on the likelihood of my having any descendants, but I've got a niece who's a Dr Who fan...)  At this point I'm thinking this is too elaborate to be a scam; this has got to be some kind of awesome service that you can sign people up for. 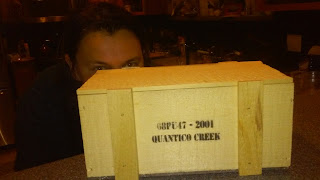 (Lurking Coz not included.)
Within was a radiocarbon dating report, putting the origin of some artifact at somewhere between 440 and 520 AD, an Italian newspaper article about a naked woman appearing in a restaurant out of nowhere, scribbling a letter on the back of a menu, begging the owner to mail it, and then disappearing again, and this: 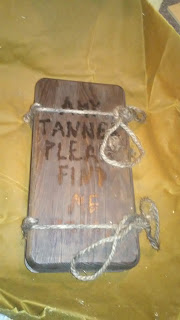 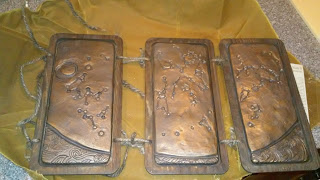 It's a star map, of a portion of the sky around the North Star.  Matches the description of an artifact mentioned in a newspaper article included with the very first letter.  Said artifact my supposed uncle Sherman supposedly dug up in an archaeological dig.  The big circle on the left panel could be the sun or a planet or the moon I suppose, since the ecliptic passes through that part of the sky.  It's really quite funky and well put-together (doesn't _really_ feel 1500 years old, mind, but still...)

Don't know if this is the end or not - can't wait to see if there's more.  If it _is_ a scam then a) it's the most elaborate one I've ever heard of, and b) when they finally get around to asking me for money, I think I'm liable to send them $20 and a note saying "well done!" 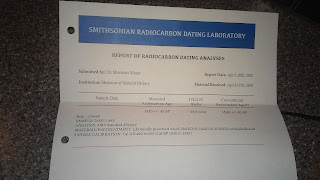 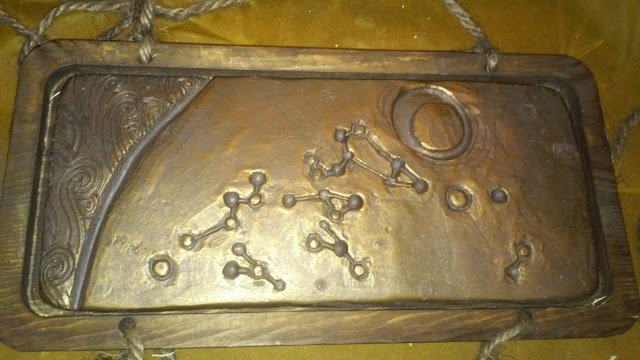 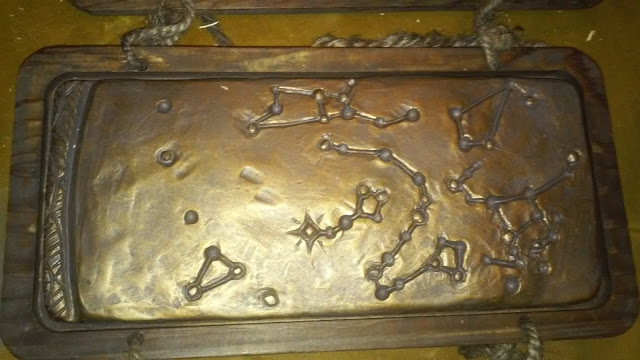 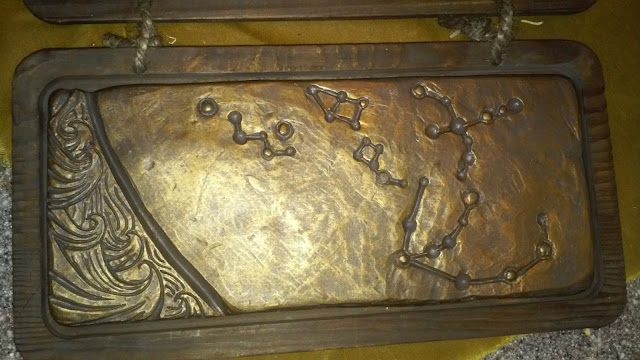 Just noticed it's been a year since anyone posted on the old For Battle.  *sniff*.
Posted by anti ob at 2:05 am 2 comments:

There are apparently still a few people left out there that Coz and I haven't cornered to tell this story to, and who are therefore still wondering why the merest mention of Vikings sends us into fits of snickering in the corner.  But it takes a little while to tell properly, so I thought I'd write it down.

Back in 2012, we got to spend a month in Spain, Sweden, and Norway.  At the very end of our trip, we visited the town of Sigtuna, Sweden, which is famous for it's runestones.  "Famous" turns out to be correct; its close to Stockholm, and the place is jam-packed with bus tours full of Germans and midwesterners, strolling the strip in their Hawaiian shirts and flip-flops, buying tacky souvenir horned hats.  Once you get off the main drag however, it's a lovely little medieval town with quite a nice museum.  And runestones. 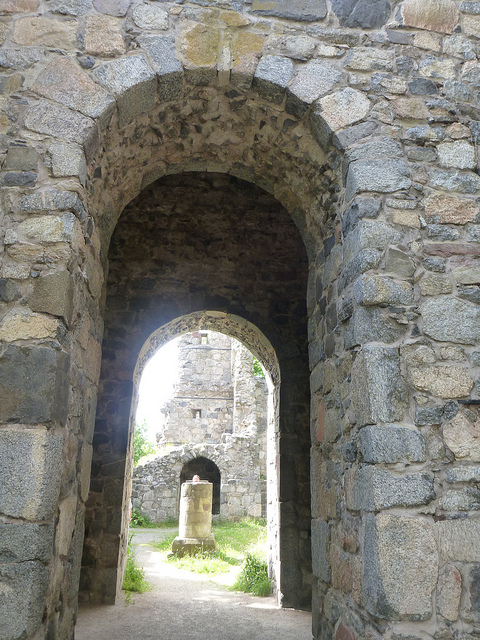 The stones are scattered throughout the town - some whole, some broken up and re-purposed in churches or graveyards.  There's a map you get from the Tourist Info office, but some are fairly-well hidden, so you have to track them down.  Each is accompanied by a small plaque, written by some slightly-stuffy archeologist 20 years ago, explaining what they have translated of the writing on the stone, and what they know of its history. 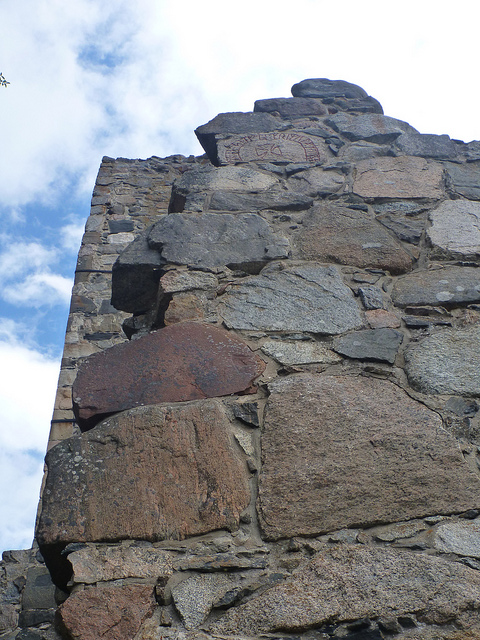 I don't remember any exact text, but it went a bit like this:

"Excellent example of twined knotwork or vines by Olaf Rolfsdottir."

"Beautiful interwoven dragon motif, carved by Hjarlmar Rockbiter on the tenth anniversary of his father's death, in his memory."

"The inscription reads: 'To honor his ancestors, Knut Erikkson had this stone carved by the hand of the Great Torbjorn' - poor spelling and bad penmanship."

It was never explicitly mentioned in the signs, and yet slowly a picture started to form; every single time he was mentioned, Torbjorn the runecarver copped some fairly harsh criticism from our unknown archaeologist / art critic... and yet Torbjorn had clearly also carved about half of the stones in town.

At which point you may be thinking "Heh; that is mildly amusing."  But Coz and I had been on the road for over a month; despite having a fantastic time, we may have been a bit frayed around the edges.  Whatever the reason, this struck us as the most hilarious thing we'd ever seen in our lives.  Pretty soon we were rushing to the next sign and expounding pretentious critiques of his obviously inferior skills.  We're giving each other the Torbjorn used-runestone sales pitch:

"Oh yeah mate, I _could_ do you one of those twisty things like Olaf Dragoncarver, but it'd be 6 months, and it'd cost ya.  Now this baby here, this I did last year for Dave the Smith over in Uppsala, to honor his wife's father.  Only she ran off with a tinker and now he doesn't want it, does he?  Never put the names on; never had a day in the sun in its life.  Now for you mate, because I like you, I could do this baby signed and delivered by Tuesday for - I'm cutting me own throat here! - for a mere 20 gold Knuts.  Do you a mostly *cough* matched set if you like; put one on either end of a bridge and no one will be able to tell them apart.  I swear it to you by Odin's left testicle.  Praise your ancestors coming and going.  Wattaya say?  Only I'd move fast; had this guy up from Stockholm yesterday and he was very interested in this piece..."

By this point we're weeping tears of laughter, and having to hold ourselves upright on ancient historical artifacts to keep from falling over.  The few other tourists who made it out this far have brittle smiles and are backing away slowly, because we've obviously overdosed on history and cracked.  Which only makes us laugh harder, because we're imagining them as customers stunned by the full kilo-candle glare of the commercial juggernaut that is the Steve Jobs of runestones; Bloodeagle-Me-Own-Chest Torbjorn.

So there you have it; hundreds of years of proud heritage and culture, reduced by a pair of giggling Aus-Sceppos to a bad Used Car Salesman joke.  I think we escaped confinement for our own safety only because the town policemen were superstitious, and didn't want to touch crazy people.  If you mention vikings or runes and we lose it a bit, just smile and back away.  And for goodness sake don't let us sell you any runestones...
Posted by anti ob at 12:29 am 3 comments: 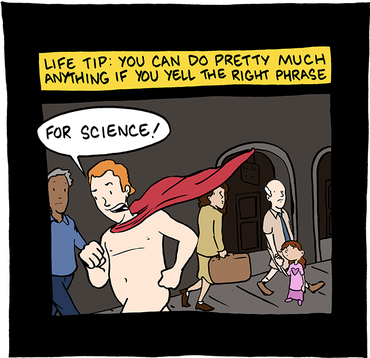 Experiments in home-extracted DNA as a cocktail garnish. I'm tentatively calling it a martidna - since people in this country seem to believe anything alcoholic in a martini glass that costs at least $8 is a martini - but that could use some work. Suggestions? 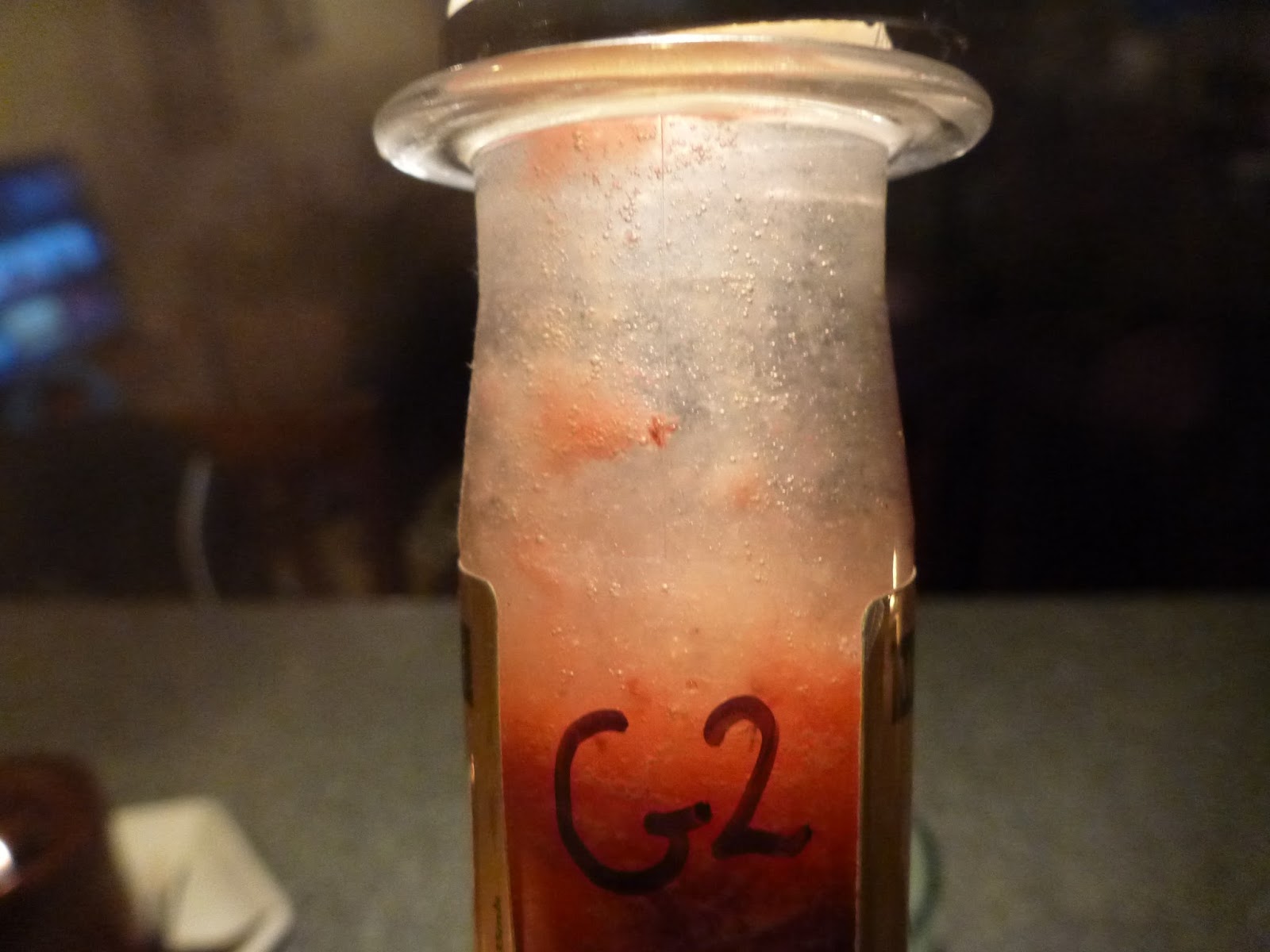 ...and I realise that its puerile and immature of me even to notice, much the less snigger, but I completely fail to believe that this juxtaposition of photos and captions was accidental: 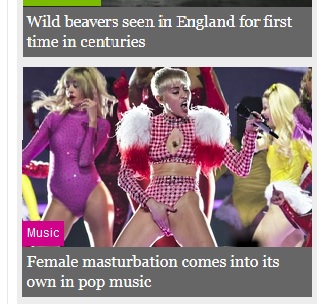 (I swear I did not make this up.  Or photoshop it.  Or anything.  Screenshotted in the wild, from the sidebar at The Guardian.)
Posted by anti ob at 4:40 pm 3 comments:

A thought I had at last year's Chrissie Pissie, and would like to bring up now in the lead up to the social season:

Can we shift the $15 surly santa presents away from 'gag gifts' towards 'stuff people would actually want in their house'.

Two reasons I can think of:
1. Less clutter in people's houses, more things they remember fondly. I really don't need more geek-themed coasters, cookie cutters or sound emitting devices in my life. I do however want cool coffee mugs, or some lovely tea, or a nice book, or a pot for a houseplant, or a cool kitchen gadget, etc.
2. More meaningful environmental impact. Each of those items takes energy, and water and resources to make. To then have them used once or twice is, in my books, not something that fits with the ethos of most of us.

I do however think that nerf guns/sports equipment that get used on the day and then handed to a child are an exception. But then, they'd get used more than once or twice, so they fit reason two.

You have been warned! Batton down the hatches, loosen those waistbands, slow-cooked turkey is a-comin'! Get ready with your servings of grits and jell-o salad. We will once again provide the venue and the birds, and look forward to seeing you all there! Turkenation is scheduled to commence around 1pm on Saturday, 30th November. Dinner will be around 6 or 7 pm as usual.
Posted by MrSnerg at 8:49 pm 3 comments: