what happens when you get a better script writer... 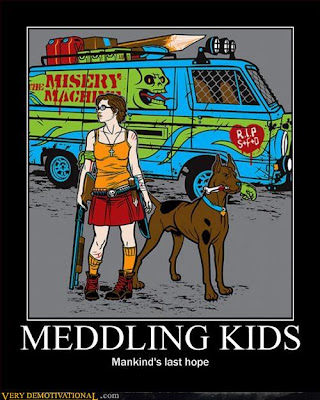 from Very Demotivational. there were soooo many good ones, but this tickled my fancy, ever so. you can also get it on a Threadless shirt (well, actually, the shirt came first, I think, but you know what I mean...)!
Posted by worldpeace and a speedboat at 3:15 pm No comments:

Sick of Being Lied To

And of course I was sick over the weekend. But it gets better: I had a day off scheduled and a three-day weekend lined up to go camping, and even managed to get out of work a little early on Friday. I was home by 3:30. At 3:45 - I kid you not - I cleared my throat while walking the dogs and thought for the first time "hmmm... thats a bit sore..." Feeling a bit better today - due back at work tomorrow morning. But I didn't start a post just to winge about being sick (well not _just_, anyways) but rather to pass along a couple of little tidbits I learned along the way.

Yesterday morning I woke up at about 6am in full sick mode. My head felt like it was stuck in a vice. A vice being dragged on a chain across a World War II battlefield behind a tank. With a gamy clutch. Driven by an epileptic. Not good, is the impression I'm trying to get at here. So I stumbled into the bathroom and fished around in the Drawer Where Aging Meds Go To Die, and found some miscellaneous things with no product or usage label on them shy of a string of dihexa-shrexa-bobexa-flourides. But I was 95% certain that they were the leftover cold medicine from last time I got sick, so I took two and went back to bed.

A couple of hours later I woke up not dead, feeling quite a bit better, and rational enough to wonder whatinhell that was I took. Hi ho trusty Internet! Here's what I found:

Acetaminophen is a Paracetamol is a painkiller by any other name. Actually, in my more coherent later state, I recognised that one.

Phenylephrine is a decongestant. No worries there. In fact, even less worries because there is some doubt as to whether it does anything.

Dextromethorphan is a cough suppressant. But here's the interesting bit; dig a little further in Wikipedia and find that there's a fairly huge amount of evidence pointing to the fact that cough suppressants don't do _anything_. Not just this one; none of em. And I don't just mean one study, I mean a meta-study by an independent volunteer organisation collecting the data from 27 different experiments on over three-and-a-half thousand people could find no significant improvement over a placebo. The conclusions in the study itself seem a little more wishy-washy - they say:

- until you realise that they are generalising to ALL over-the-counter cough medicines. They found some ambiguous support for the usefulness of expectorants. (Personally, when I've got one of those really tight hard-to-breathe chest colds I go looking for something with an actual expectorant (and its always hard to find something) and I find them helpful in those cases, but that ain't science... It certainly wouldn't surprise me to find them not useful on different sorts of colds.) For cough suppressants, they could find nothing even ambiguous to say.

(Though the wiki gods do hold out this hope: "Recent studies have found that theobromine, a compound found in cocoa solids, is more effective as a cough suppressant than prescription codeine. This compound suppresses the "itch" signal from the nerve in the back of the throat that causes the cough reflex. It is possible to get an effective dose (1 g, though 0.5 g may be sufficient) from 50g of dark chocolate, which contains 2 to 10 times more cacao than milk chocolate.")

So whats my point? Know what you're taking, he says, ensconcing himself firmly in the do-what-I-say-not-what-I do-camp? Yeah, some of that. But my story had another side too; those mystery drugs _did_ help me. Am I telling you this just to ruin the placebo effect for you? No, torturing sick people isn't _that_ funny. But don't let yourself get sucked in by expensive cold drugs - a couple of painkillers and some good chocolate will probably do you just as well. Even if that's just the placebo effect now too, at least its a _chocolate_ placebo...
Posted by anti ob at 6:43 am No comments:

For the past few months, I've been enjoying the UK version of WIRED magazine. They have articles on all sorts of interesting geeky topics. Including this one:
10 most absurd scientific papers
Pigeons as ultimate art critics anyone?
Posted by Krin at 12:39 am No comments:

how cool is this?

if anyone can work out how to imbed that video into this post, feel free, I couldn't.
Posted by worldpeace and a speedboat at 10:39 pm No comments:

It makes me happy.
Posted by anti ob at 3:08 pm No comments:

Posted by worldpeace and a speedboat at 12:58 pm No comments: