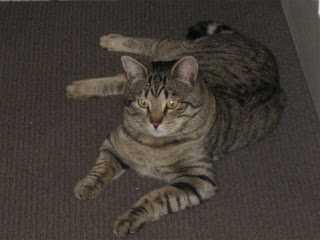 On Friday afternoon, with some time to spare, the kids and I went to look at pussycats at the RSPCA. Having procrastinated for months about getting a dog, we finally decided that maybe we were ready for another cat instead. We looked a couple of weeks ago, and saw a lovely cat called Puddy and went away to think about her. We had lunch and generally buggerised around before deciding that perhaps we might adopt her after all. We called the RSPCA who told us that someone else was also considering adopting Puddy and that they couldn't put holds on animals over the phone. So we trooped back to the RSPCA to find Puddy being adopted. We did look to see if anyone else would be suitable, but it had been a busy weekend and there were few cats left, and the ones that were mostly didn't play well with either small children, other cats or both. So we decided to wait a bit more then look again.

So Friday found me and the kids back again. Charlie went through the door first and as I followed I heard a crash and turned thinking "Oh god what's he done". Bad Mummy. The sound I had heard was a cat called Garfunkel jumping down onto the floor and throwing himself against the metal door of his cage, smooching and purring madly. I took this as a good sign. A quick look at the other cats showed that there were no other contenders for the post of third pussy cat at our house, so we went into the meeting room with Garfunkel to see how he reacted to us. After investigating for some minutes he deigned to twine himself past the kids, much to their delight, and play with some toys. We decided to adopt him then and there.

Of course all this was taking place while I was supposed to be on my way to somewhere else, so I was already a little stressed about being late. The time it took to do the paperwork stressed me more, but as it turns out it was lucky we got it done then and not later. Finally the paperwork was done and I arranged to pick up Garfunkel before 5pm that afternoon. "Call if you can't make it back today and you can collect him tomorrow" the nice RSPCA lady said, words of advice I should have heeded. But anyway, off we went to swimming lessons with Charlie, who after some upset, had a lovely time. Even better I had bought Gemma's swimmers and she had a paddle in the pool as well, then a big tantrum when I pulled her out so we could get changed and go to pick up Garfunkel. It was 4.26pm and I was in Belconnen. The RSPCA was about a 20 minute drive away, allowing for roadworks which seem to have spread all over Canberra like a rash at the moment. After much wriggling and mucking around we were finally dawdling (Charlie) back to the car. In we went and off to the RSPCA. We arrived at 4.48pm in plenty of time to pick up Garfunkel. Then there was more mucking around as they found out what it was that the vet had him eating (prescription cat food!), I bought a bag of it (luckily he likes ordinary cat food) and Garfunkel was bought down in a cardboard carrying box ready to take home. I put Gemma in the car and the nice reception lady bought Garfunkel outside for me so I could put him in the car.

My first mistake was not to bring my own cat carrier. Had I thought to do this I could have saved myself so much stress. My second mistake was to put the seatbelt through the handles of the cardboard carrier. Things went downhill from there. Within 5 minutes of leaving the RSPCA Garfunkel had his paws out through one of the breathing holes in the cardboard carrier, and was making room for his head. When his head popped out I pushed it back in, while driving, and stuffed my jumper in the hole. Being a rather intelligent cat he simply did the same on the other side of the box, which I couldn't reach and busted out of that sucker. So now I had a stressed cat loose in the car. I pulled over and tried to get him back in the box, but he wasn't having it. He jumped up onto the parcel shelf in the backseat and stayed there, panting. So I was faced with a choice, sit in Canberra and wait for ??? to happen or drive home to Yass and hope for the best. I decided on the latter course and set off. As I wasn't thinking straight I ended up trying to get down Northbourne Avenue on a Friday afternoon, which is probably the closest Canberra ever gets to a traffic jam. By now people were starting to notice that a large cat was sitting on the parcel shelf of my car. I saw one man break into a huge amazed grin like a child who has just opened the best present ever, several people pulling in behind me to look at the cat, and one driver with a camera phone taking photos. I just hoped that she wasn't sending them to the RSPCA. At this point Garfunkel decided to come back into the front seat, but my attempt to push him into the passenger footwell, after grappling with the carrier box so that I could use it to seal him in, made him retreat to the relative safety of the passenger shelf again. Whenever I went above 60km an hour he got nervous, which didn't bode well for the trip home down the Barton Hwy.

As Canberra traffic often does, the road cleared a couple of blocks onto Northbourne and we travelled fairly smoothly onto the Barton. People continued to swing in behind me to check out the cat. I continued to check the rear vision mirror to make sure he was staying put. Luckily, it started to get dark and he calmed down considerably and the drive home was much less fraught. It's not much fun driving and wondering if the cat is going to dart under your feet and cause you to crash at 100km an hour. Finally we were home, and with a new problem - one cat loose in the car, and no way to get him safely into the house. I took a chance and leaped out of the car and opened the garage. Then Garfunkel and I eyed each other as I tried to time my entry back into the car so I could get it into the garage before he could get out of the car. He must have been a bit groggy from the trip because I beat him in before he leapt out. Now things were a bit easier, as he could escape into the garage, which he did, but he couldn't get out of the garage and escape into the night. This time I pulled down one of the cat carriers I should have taken to Canberra and attempted to put him in it. He did not want to go. After several attempts I ended up tipping him in head first. Then I took him into the house.

I put his carrier down in the laundry and, still not thinking clearly, went to close the blinds in the house as it was dark. While I was doing that Charlie let Garfunkel out. This is not the recommended way of introducing a new cat to the existing cats in the family. I then dashed into the loungeroom and grabbed Garfunkel before he blundered into Nefertiti and started WW3. He was then put safely into the spare room for the night. The next day we let him out to meet the other two, with much hissing and yowling (from them). Garfunkel however, acted much like a young guy in a bar who won't take no for an answer. He just kept hanging around and tormenting them as if to say 'You're a cat, I'm a cat therefore we must be friends'. It seems that persistence is beating resistance. Hostilities have almost ceased, although the other two do try to escape outside when possible. We have kept the cat flap locked so far because he needs time to acclimatise. But once he's had a week he is free to wander around during the day. He will just need to learn to use a cat flap.
Posted by Mindy at 5:24 pm No comments:

Does any one need any plastic or glass containers? We have a bunch and I'm on the verge of chucking them in the recycling, but I thought I'd see if anyone could actually use them first.

I also have a tree full of lemons - not storage containers but please come take them away too. Well they are a storage container for lemon juice.... not particularly reusable. Unless you have gelato and then they are pretty handy....

But I digress. If you need containment, then speak up now!
Posted by Mousicles at 4:09 pm No comments:

Happy Birthday to ME!!

1. sproglings of ForBattle crowd and associates
2. spogling of singing friend
3. best friend and brother of other singing friend
4. ex-co-worker who shares the same year too.

It's also the anniversary of the Vesuvius eruption that covered Pompei.
Posted by Mousicles at 11:37 am No comments:

A much funnier movie than the last.
Posted by anti ob at 3:35 am No comments:

that is all.
Posted by worldpeace and a speedboat at 11:48 am No comments:

Since starting uni at Macq U a few years ago I've been passing this building on the bus up there. It's the Ed Gein Ella Bache beauty college somewhere on that big freeway thingy which has been under constant construction work for, like, forever.

I understand I am not the target audience (women who give a shit) but I cannot shake the feeling there is something rather wrong about their motto. They seem quite proud of it, including it on their website and all. So perhaps it is me. I know that in Hollywood and the like they have botox parties, perhaps it is also a fad amongst the Pretty People to have ... Epidermis Parties. In which you nibble on of exfoliate like so many bowls of peanut M&Ms.

I don't use any product other than soap and, while I don't feel any desire to eat my skin neither does it repel me. If I spill sweet lemon gelato on my forearm, I'll happily lap it up, unconcerned about the hygiene. Nontheless, I do not at all see how 'skin good enough to eat' is a persuasive slogan. "Skin good enough for some playful biting after a few wines." That's marketing genius. Is it a common fantasy though that people want their skins eaten? Like, devoured, chomped up and swallowed?

I will stop posting xkcd comics...

...when he stops writing them about us.

As you know, my Lil Sis is in Japan for a year. Her partner has just built a blog, and the first post has some very amusing pics