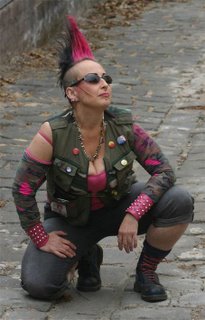 Or maybe another name, if you knew her in one of her other 'incarnations', as she liked to call them.

Fiercely loyal, loving, caring and compassionate to her friends. Dismissive of buffoons and twonks. Lethal and/or crippling to those who had done wrong to her and those she loved. Hilarious, intelligent, bouncy, savage, political, mystical, intuitive, hard working, contemplative, reactionary, silly. Lover, amongst many things, of Tigger, hippos, computers, Tamana's North Indian Diner, hot pink, BDSM and any other number of fetishes, Monty Python, sherbert, The Goodies, and her mum. Hated hypocrisy and ignorance. Overcame more adversity in 39 years than most of us ever will in the rest of our lives put together, and did it with the loony sort of dignity that we loved.

Anyone got other photos? Forbattlers, edit this and add them, or send them to me. The one above is very recent (edited: by Renee, thanks for that), but I'd love to whack an SCA image up as well. Fliss has a lovely old one on Flickr but I wouldn't post it without permission (edited: thanks Fliss! see below). All of mine are in storage, and anyway, I gave the best photos that I took of her, to her. Bugger. 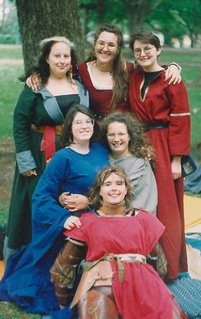 Maybe if we leave a bag of Wizz Fizz and one of those freaky pink drinks (corn, ice and cocount shavings optional) on the kitchen sink, and pretend to go to sleep, maybe she'll leap out from behind the door and then we can nab her. 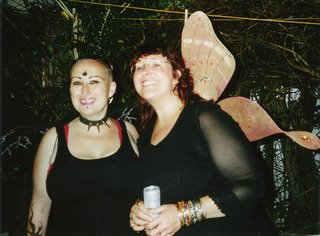 (meg, this photo rocks, thank you so much)

Vale Aveline.
We're thinking of you.

Post-Postscript: details of Melbourne Funeral here. Sydney Memorial Service - Saturday 10th Febuary - to be posted here in the next few days and hopefully cross-posted with the Melbourne crew. expect more postscripts! I'll apologise now to fellow ForBattlers for any inconweenience, but as Snerg pointed out - everyone here loved Aveline too, so we're sure they don't mind the traffic :)

Posted by worldpeace and a speedboat at 3:01 pm No comments:

So, when Coz n Ob cruelly and heartlessly desserted us went overseas, they left us with lots of lovely wine with the instuctions to drink with friends. We decided open the first on the National Day of the Lamb Chop Australia Day

Baggy Trousers organised a BBQ, much meat was consumed. There was even a salad or two to make us feel virtuous for consuming THAT much meat.

A lovely day was had by all. Wish you were there.
Posted by DV at 9:12 am No comments:

Heyas, just a few pics to help the Sydneysiders through the long hot summer.....mmmmsummermmmm

Taking the dawgs around to our place

The next morning, got to see Mr Plow...'that name again is Mr Plow' in action.

A few more on my Flickr. Having fun, haven't bought a gun yet.
Posted by Cozalcoatl at 4:20 pm No comments:

I have a friend who, amongst other life changing decisions, began 2007 by giving up meat.
Yes, "giving up meat" as opposed to "becoming a vegetarian."
She loves meat and doesn't have a problem with killing animals for food. She is giving up as a protest against the way that animals are treated during their life time.

And I thought, "Well, surely one person not eating meat isn't going to have the slightest effect as a protest, because the industry is geared to excess production. Anything that isn't sold is chucked or turned into pet food, and no one is going to notice throwing away one extra chicken and a couple of steaks per fortnight.
"Isn't there organic, free range chicken you can buy to roast? And didn't Harry say something about Australia being the world leading in organic, free range beef or something? If so, then there are ethical options for the meat eaters. Probably not for pig products though.
"So, if you want to protest against the poor treatment of meat-product animals, instead of simply not eating meat (which will be noticed by noone except yourself) surely the way to do it would be to pay the extra for the ethically produced meat and drive the demand up."

The reason there are so many free-range and barn laid eggs on supermarket shelves is because people decided they wanted them and egg farmers had to follow suit. Net result = happy chickens and yummier eggs. I assume the same thing could happen with ethical meat.

Now, i am not supposed to even be writing this entry and i'm certainly not going to spend time researching the farming practices of australia when i should be researching cold bugs (far more interesting *cough*) so all this is speculation and hearsay. This is where you lot, oh knowledgeable-about-many-things people, get to be *shudder* useful.

How are animals treated for meat production in the mass market? I know about chickens, and i've heard horror stories about pigs, but i have no idea how (or even if) the farming practices differ for wool vs lamb, and beef vs dairy cattle. Do the baa lambs get to gambol in the fields or are they penned?

Is there such a thing as an organic free range karmic hippy pig? I thought they were all intensively farmed.

And (most importantly, ha ha) am I right?

If so, I fully intend to try eating the ethical stuff, assuming i can find some in this sprawling metropolis.
Posted by Pip at 4:03 pm No comments:

The last thing Harry made me do before he left Australia, was fly to England.
Okay, so on a scale of 1 to unpleasant, going to England doesn't rate too badly, even in winter. Especially since, a few brief hours later, he made Taffy do the same thing. It all fell to pieces when Harry turned up too. Who'd have known?

The Simspons converged on the little undefended isle of England for the first time in nearly 15 years.

How to spot a Simspon: Step 1. Look for the bad photos...


I didn't want to tell anyone, but somehow they all worked out that i was possessed. 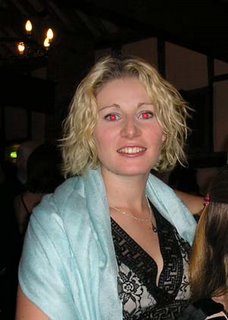 At first Al was quite puzzled by the whole affair, 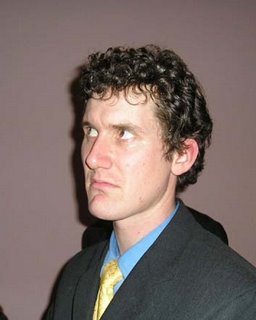 because he was possessed too. 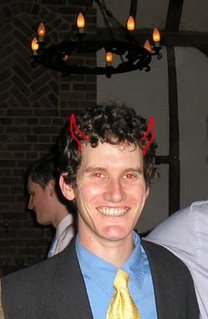 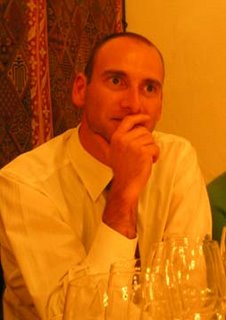 but you could tell that he was really quite worried, 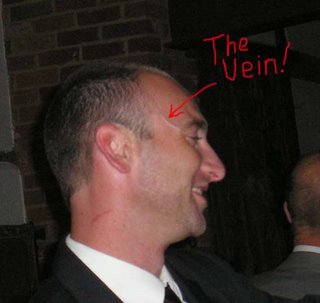 so he struck a noble knightly pose. 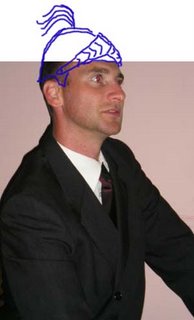 It didn't fool anyone.


Cheers guys, it was fun.

Especially that bit where you abandoned me without my gloves or beanie for 20 minutes on an exposed, windswept hill top with sideways rain in the middle of winter, locked out of the car, miserable with flu, and dying for a pee. You bastards.
How's the Canadian winter coming along? The summer here is great!
Posted by Pip at 4:36 pm No comments:

we didn't think you really meant it...


look what you've gone and done! 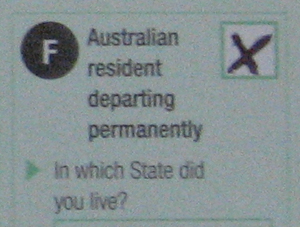 sure, you gave away a whole lot of really cool stuff to us. and came to live at Maison d'Speedboat for a while, because you were "homeless". you even let your ferret commune with my drainpipe (oooh errr)...

and held your supposedly "fairwell" picnic and all that.

but we didn't think you really meant it... 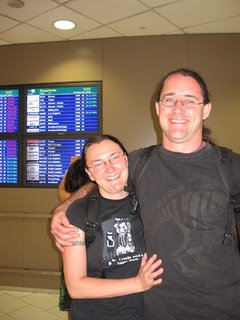 Posted by worldpeace and a speedboat at 3:31 pm No comments:

Goodbye, and Thanks for All the Bumsex Jokes

You guys sick of saying goodbye to us yet? Well too freakin bad; some things take awhile to do properly... and saying goodbye to you lot, like many of my projects, is something I intend to do half-arsed at best. Maybe even quarter-arsed. We could stretch this out for years.

The last couple of days have been brilliant, and could only really have been better if we'd been able to bend time to let us spend the whole time chatting one-on-one with everyone. I'm going to miss sitting around someones backyard with a beer crapping on about Midori Shots (tm) from a crossbow like you wouldn't believe. But we'll be back, and you'll hopefully be coming to visit, so it'll all be good.

Taking the Flaming Sword of Flatulence Jokes to the place where it'll do the most good, Be Seeing You, Ob and Coz.
Posted by anti ob at 10:51 pm No comments:

I subscribe to Amazon.com suggestions. It's an easy way to find music of similar tastes. This was fine until now. Something very strange happened. My latest recommendation was:

Now I've left the Live at Budokan link there to give you an idea of the kind of music it is. And the likelihood that that demographic is listening to self help CDs. I was angry at first because I assumed it was advertising that was just poorly targeted... but what if it was a practical joke? Can I get enough friends to click on the right things to recommend something ridiculous to many many people?
Posted by MrSnerg at 11:53 am No comments:

Why didn't I get one of these for Christmas?


I so wanted a Tesla Purple Energy Sheild.

I don't love you anymore, Santa!

So anyone have any interesting ideas for the coming year? Anyone got any cunning suggestions? Any resolutions abandoned already?

I know some of us have resolved to leave the country, which is pretty interesting. I can't seem to plan much beyond, "I hope to get some sleep tonight" - which, thankfully, I usually manage to achieve.

My standard resolution is to lose weight...but that is probably because I spend most of the week preceding eating far too much! I imagine that's pretty standard for most people.

2006 was mostly spent growing a baby. I guess the focus for 2007 is to learn how to drive said creature and end up with a toddler. Sigh. Doesn't sound like much on paper, but I think it's going to be hard work in reality.
Posted by Mousicles at 6:09 pm No comments: