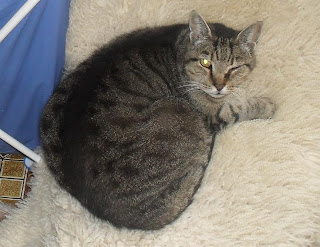 He was a fearless kitten. Muscat was so unimpressed to suddenly have a little brother and hissed at him for about a month. Fronti just ignored her.

When he was tiny Fronti could clear a room with his farts. That was when we discovered he was lactose intolerant. The farts stopped when the milk stopped.

He was also incredibly noisy for such a tiny creature. We used to have the cats sleep on the bed with us. Muscat would sleep near our heads but Fronti could only sleep at our feet. The noise of his purring would keep us awake otherwise. We thought the noise would decrease as his got older but we were very wrong.

At about six months old he was chased up a tree by a neighbours dogs. I had to call the fire brigade to get him down. I took photos of the event but the record was lost when the camera was stolen shortly afterwards. He happily rode on the fireman's shoulders down to my arms. I think the firemen were happy to have something to do at 6am in the morning.

We was a great catcher of mice, rats and birds. I didn't witness it but I was told that Fronti would sit in the backyard and taunt the magpies into swooping him. Fronti would leap up to try and catch them when they did. Fronti also loved it when Stig would give him fish heads to eat. Fronti would take them to the 'Fronti killing ground' and happily crunch them down.

At his largest, Fronti was almost 12kgs. But he was a cat with a large wheel base and while he puddled well he would never be considered obese.

At about seven years old Fronti developed a bladder problem which had him on special food for the rest of his life. This same condition killed his brother. Despite a few acute times, the condition was managed. At the beginning of this year Fronti suffered an injury to the edge of his eye which needed treatment. When he was a kitten he caused the injury to Muscat's eye which is still quite obvious as the cloud on her eye. In 2009, Fronti was diagnosed with a thyroid condition which had him injected with technicium and radioactive iodine to destroy the hyperactive bits of thyroid. Shortly after, he had a benign lump removed from his side. He has been an expensive kitty costing us probably about $7000 over his lifetime, but it's been worth it.

His most recent illness progressed much faster than I expected. Last week I noticed he had stopped eating, his meow was muffed and he seem to have a sniffle. The vet did a battery of tests which ruled out most common problems. We don't know exactly what killed him but it was likely some sort of tumour in the liver or kidney. Basically he died because he was old and the parts started failing. If we had caught the lung infection in time it was likely he wouldn't last much longer past it. It does explain the big cough he had during winter. I just thought it was an extra large furball but in hindsight it was probably the early chest infection.

Fronti was huge and cuddly and noisy. He was often the butt of many jokes and he was loved for it. He was greedy and lazy and warm and soft. We was also very gentle and usually obedient. He had a long and happy life for a cat. 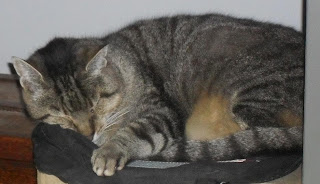 Edit - I forgot to mention Fronti's drug days when he was heavily into the catnip. Those days he would head out before breakfast and lick the dew off the catnip and usually eat leaf or two. He would spend most of the day curled up around his precious plant. The poor old catnip plant was almost pruned to bonsai status.
Posted by Mousicles at 1:24 pm No comments: