Farewell date and getting rid of stuff

I'll do some sort of farewell thing on Sunday 8 March. Not sure what yet, suggestions that don't involve lots of planning or expenditure welcome, as I'll be living out of a suitcase at my sister's by that stage.

I'm also selling (almost) everything I own. If you're interested and have not seen the list then it's here: http://sites.google.com/site/krinsale/
There's some SCA stuff not on that list: tavern mugs, a 15th German mug with a tudor rose on it by Alex the Potter, an enclosed lantern which can house a candle or two and it good to be carried around at night, candles (free to a good home).

*Assuming the British High Commission doesn't reject my visa application and gets it processed in the timeframe I've estimated it should take them.
Posted by Krin at 10:43 am No comments:

As per a challenge put to me 12 months ago. Translated from French to Australian and for the first time EVER....

Mix the flour, sugar in a bowl. With your fingers knead the butter into the flour mix until small granuals are formed. Mix the honey and Vegemite together.

In a small baking tray lay the rhubarb and pour the honey over. Followed this by the raisins, pear, banana and chocolate. Finally put the crumble on top and press lightly in place.

So, last year while in France I was challenged to create this gem of modern cuisine. However, I did not posses the culinary skills so I enlisted the aid of a master French chef who used her master skills to create this gem.

Today I experimented on my work colleges with this. So far no casualties...although some nearly died when they discovered that my description of Vegemite being "like" nutella was a little exaggerated.

It doesn't beat beer, BBQ and the hottest one hundred...but it does pass the time.
Posted by Dr Nik at 6:32 am No comments:

You know you want to try it..

Settlers of Catan in cupcake form

What could possibly be better??
Posted by DV at 7:43 am No comments:

how cool is this?

I could spend hours on this one...
Posted by worldpeace and a speedboat at 2:41 pm No comments:

At least one of the girls is an overachiever. They are supposed to take about 4 weeks to start laying. We have them in under 1. (or just over one if both of them are online....)

No further damage to the strawberries today either.

And here's a picture... I've put a store bought free range egg beside them for size comparison. 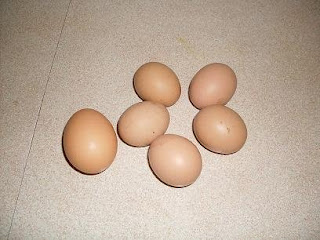 Posted by Mousicles at 8:03 pm No comments:

The chickens ate my homework...:(

Well... not my homework... just all my lettuce and rocket seedlings. I've managed to save the rosemary, the lavender and the strawberries.... for now...

I am impressed at their ability to dig massive holes compared to their body size. I'm not impressed with where they chose to do it.

I've invested in some chicken wire, but I've run out of weekend to do anything useful with it.

In a vain hope to distract them from the little bit of new garden I have left, I've ripped up a chunk of old garden and dumped a bunch of compost on top in the hopes that it will get their chicky hearts all a flutter and they will dig it all through for me....

Then I'll plant new seedlings on that spot and fence it off.

Is it possible to outwit creatures without a brain...?

Apart from that, the ladies have been quite entertaining. I manage to catch at least one each day and the lad gets to have a pat. Three weeks to go until we see some eggs... Then we will really get excited.
Posted by Mousicles at 7:46 pm No comments:

eg: First they came for the Jews. But these particular Jews lived in Israel and had a load of American weapons which they used to bombed the fuck out of Hamas and anyone else who looked a bit Palestinian. Then they tried to come for the Jews again. But the Jews still had those F-16s and bombed the fuck out of them again. Then when Hamas came for me, it wasn’t so bad cos they didn’t have any limbs or eyes left, and I escaped.
Posted by harry at 11:50 am No comments:

The fun thing about living on the other side of the world is that evil plans I hatch in the middle of a dark night occur about the same time as someone else is sipping their morning coffee in the sunshine.

Well DV and I were lamenting the fact that we don't drink enough cocktails any more. We then equated this fact that cocktail making is too easy and safe.

So, being inspired by the Tukeyrita and the Turkey-Alexander, I wish to put forth this challenge (yes Snerg this one is for you).

I challenge you Battelers to create a cocktail at your next party....
and the theme ingredient is: MELTED CHEESE.

Once this mission has been completed a new theme ingredient will be announced (please post photos, recipes, tasting descriptions and coroners reports here)

Snerg: I think I am still waiting for you to make a cocktail out of the "Sparrow Terrine" that I brought you back from France. Your failure has been noted.
Posted by Dr Nik at 7:38 am No comments:

There is more to Vampires than Sunnydale High

Last night,
I sat down and drank an entire bottle of red wine whilst watching True Blood.
You know, that other Vampire tv show?

I stand corrected - there are some Vampire aspects that Joss didn't do so well that all other attempts at serial Vampyrism are doomed. (Part of me wants to go watch Twilight so i can be proved right.)

Vampires as the new racially-discriminated class makes wonderful social narrative sexy and dangerous and oh so very emo. I LIKE it!

A programme, my kingdom for a programme

You'd think, when organising a street party in Sydney's CBD, with "over 600 acts" that a timetable would be produced and freely available so that attendees could work out how to see the various acts of interest. You'd think.

All I can find is the line up, which is sometimes sorted by precinct. And the "e-card"

So, as best I can work out, the Cat Empire is probably on this Saturday at 7pm (ish) in The Domain, followed by Grace Jones, assuming the order on the website is the order of play and not alphabetical.
Using the same logic, the only other band that I want to see "Mikelangelo & the Black Sea Gentlemen" are also on at 7pm (ish) in Hyde Park.

This is why I want a programme, so I don't wander aimlessly, missing the artists I want to see. Is that too much to ask? Really?

At least we'll have Adam Hills to keep us company while waiting. Who wants to help me elbow my way to the front of the crowd? I expect we'll be there from 6pm in order to do so, or is that too late to secure a good position?
Posted by Krin at 10:25 am No comments: