I think I surely must have told this story to every single person I've ever met, and yet digging around in the For Battle archives I can't see any evidence that I've ever actually scanned the photo in and shared it; shame on me. Alas its in an old picture from back in the dark ages, when dinosaurs roamed the earth on 1200 baud modems and people thought the world would end in 2000 for some arbitrary calendrical reason, not 2012 like any sensible person nowadays. Its called a "photo" apparently, and no matter how many times I put it in the DVD drive it still won't read. (And it turns out Jesus isn't above sabotaging the oldsters' computer to keep embarrassing photos from coming out on his 21st - century. I've just spent the last hour trying to make the damned (sic) scanner work).

Anyways, Coz' and my favorite favorite thing of all the amazing things at the British Museum was this set of mosaics from back before the sanitised authorised biography of Jesus outsold the previous umpty-eleven tell-all versions. I don't remember where or when it was from, though there should be another of those photo things around here somewhere with the details. 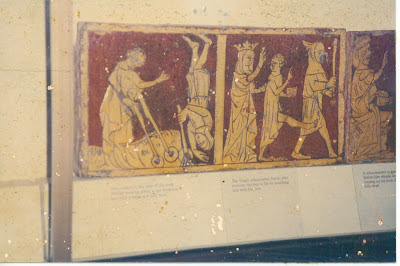 The text beneath, for those of you inexplicably having trouble reading this lousy scan of a lousy photo which hung on our wall for a decade collecting dust, (and taking into account that I can barely read the damn thing myself) reads:

"Jesus plays by the side of the river. Jesus making pools, a boy destroys one with a stick and falls dead."

"The Virgin admonishes Jesus, who restores the boy to life by touching him with his foot." (ed: read, "sulkily kicking him in the arse...")

(Something about Jesus striking a teacher dead to avoid having to explain why he didn't do his homework.)

I wish I could find the one where Jesus - having established a bit of a rep in the whole striking-people-dead department - goes round to play with a neighborhood kid. The kid's mom sees J and hides her kid in the oven, but J being omniscient knows this and turns the kid into a baked ham.

Anyone who has ever been or known a child knows that an omnipotent Jesus was a serious pain in the arse when he was a kid.

Hopefully comments will appear to everyone no matter how gibbous *such* a good word the moon is and no-one hates the template too much.
No, I have no idea why only comments from 2005 and today appear. Mystery!

Yes yes, all the side-bar links have gone.
If you want any of them back or have any suggestions for new ones, add them in (or let me know and I can)

If you want something changed, go forth and do it!

If you hate it all and want it to go back to the way it was (maybe you were one of the chosen people who the comments would show themselves to), invent a time machine.

Okay, just do that last thing anyway, because it would be cool.

Okay, the weird comments widget we have is annoying me. Comments seem to go missing or only appear if you dance 3 times widdershins wearing a gold blanket under a gibbous moon.
So, anyone have any objections to me changing the blog template and getting rid of the comments thingy.
I guess we will lose all the old comments but we may then be able to see any new ones. 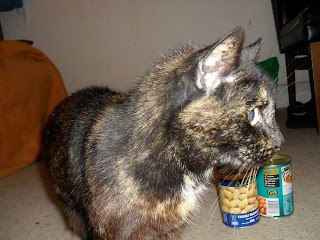 Muscat was a found cat. MissFliss' sister brought her home from the vet where she worked and we were a good home recently left catless when Kestrel was hit by a car. We were made for each other. We weren't sure how old she was so we decided that St Crispin's Day was close enough and a good date to remember.

Muscat was tiny but from an early age loved to ride on shoulders. In fact, she couldn't be held any other way. It you picked her up she needed to go straight over the shoulder or she would claw her way there.

When she was one year old she nearly died when she was hit by a car. She spend two weeks at the vet recovering. Her jaw was dislocated and she lost most of her teeth. Her skull was cracked and she most certainly suffered brain damage. Initially the vet didn't know if she would survive. I guess if they recommended putting her down at that point I would have agreed. But no one suggested it and Muscat made a good recovery.

She was very affectionate. She particularly loved tall people and would beg to be picked up by Stig or Rufus. At Strathfield, the house had a shelf built above the picture rails and Stig would routinely throw her up there where she would happily prowl around the room. She also loved boxes (as many cats do) and she loved to sleep in the washing basket. Often I would throw a piece of clothing in to be greeted with an unamused 'mrow!'.

She constantly had teeth trouble following the accident. Every few years she would need a teeth clean and have a few more removed. She was down to her last 4 teeth. She also had a clouded eye for most of her life where the kitten Fronti scratched her during play.

She always looked a little cranky because of the markings on her face. Perhaps she was a little cranky too as tortoiseshell are said to be. If she wasn't sick she would fight the vet. She was determined. If the child was annoying her she would stand her ground rather than retreat to safety. Very feisty.

Eighteen years is a huge amount of time to share with an animal. She is the longest serving pet I've ever had. I don't expect I'll have another relationship like it.

She was affectionate and warm and cuddly on her terms and cranky and sharp when she wasn't in the mood. I will miss her. 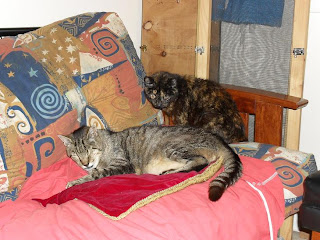 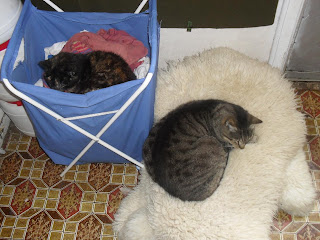