All right, so even I have admitted at this point that Facebook has completely supplanted the blog as a method of keeping in touch, but I want to squirrel some maps and route information away to share with others (and myself, when I forget it 5 minutes from now.)

This weekend we did an awesome hike to a place called Pueblo Canyon Ruins, in the Sierra Anchas.  The ruins are relatively hard to get to, so they have remained in pretty good condition; a fair number of rooms are intact, above-ground floors are still present if broken, and there are a fair number of pictographs that would at least appear to be genuine. 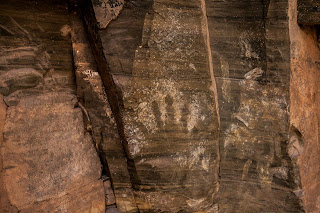 There is some graffiti damage (some of which is also apparently historical - cursive script in chalk dated 1911 that, given the climate - I can believe could be legit.)  There is also a stretch of trail on the way in that is pretty scrambly.  Not terrible; we did it with packs, dogs, and a man with a broken back, but I wouldn't try this hike with anyone who wasn't willing to scramble on all fours.  Its supposedly about 8 miles round trip (sounds about right; took us most of 3 hours in and a bit over two hours back) and involves about a 1,750 ft elevation gain, almost all of which is stacked at the beginning.  You can camp at the end but almost nowhere else, which means you're camping right in amongst the ruins so  - duh! - for the love of whatever don't spoil it.  Don't light fires back under the overhang, pack out your trash, and not to put too fine a point on it; crap before you come or be willing to walk a mile back to do it.  (Can't believe some people.  There was toilet paper in the middle of the trail at one point.  If you appreciate it all this should go without saying.  If you don't appreciate it, don't come.  You won't enjoy it anyways.)

How to get there:

Hwy 188 south from Roosevelt or north from Globe, to the eastern end of Lake Roosevelt.  Its about 3 hours from Flagstaff to this point.  Turn north on Hwy 288 - also called the Globe-Young Highway.  Pass over the Salt River.  At about mile marker 265 you'll see a prominent marked righthand turn onto Cherry Creek Road (National Forest Road 203).  This is a good dirt road for the first 20 miles, with a number of popular camping areas along it.  You'll climb in and out of a couple of valleys, and cross a couple of streams - there aren't many places to go the wrong way, and they're fairly obvious.  Somewhere around the 19-20 mile mark you'll cross a stream by a prominent private ranch and the road gets markedly worse.  They say 4WD is required - I think the clearance is more important than the actual power to all four, as the road was reasonably flat, just scattered with largish boulders.  We made it in our little Jeep Compass, which is by no means an offroad vehicle, but in places we were pushing our luck.  At the 21 mile mark you pass a sign, and the cliffs to your left are starting to look pretty impressive: 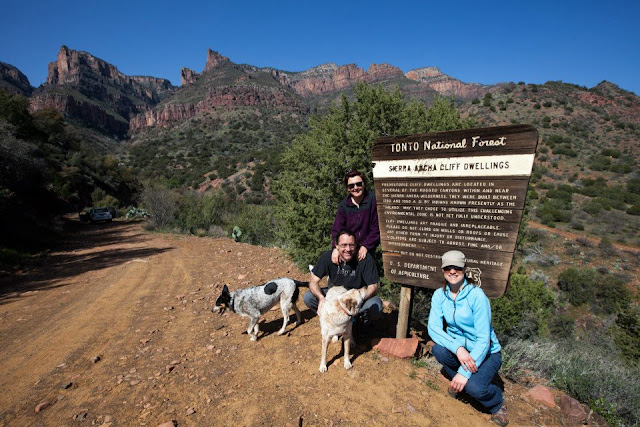 Somewhere about mile 23 (our directions said later, but our odometer said about 23) you pass over a partially buried steel drainage pipe, and within the next 100 feet you'll see an old mining road heading precipitously up to the left, and down to the right.  (The guides we were following said this road was "passable but not worth it."  I think you'd be insane.)  Just up at the next bend in the road there is a parking spot on the right, and a faded sign on the left.  You should actually be able to see the ruins you're heading to ahead and to the left from here - high up the walls - but you'll have to have good eyes.

The trail heads steeply up the mining road for maybe a mile, passing a wilderness area boundary sign, and eventually coming to a huge grey boulder on your left.  It zigs right then left - no real branchings to this point, til it comes to a bit of meadow with a big white rock on the right with a (modern) spiral pictograph: 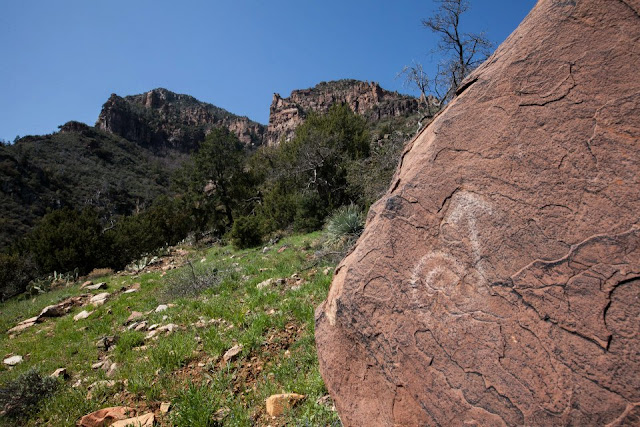 There is an easily-missed fork at this point: bear right to stay on the correct trail (left takes you up Cold Creek.)  From here there are no more real choices.  Climb up above the oaks and into the manzanita, from which you can see down to your car far below.  You're moving north at this point, around the point of a ridge and into the next side valley (The main valley, and road you were on, heads north-south.  This side valley faces east.  You're coming northwest, onto the southern side of the V.) 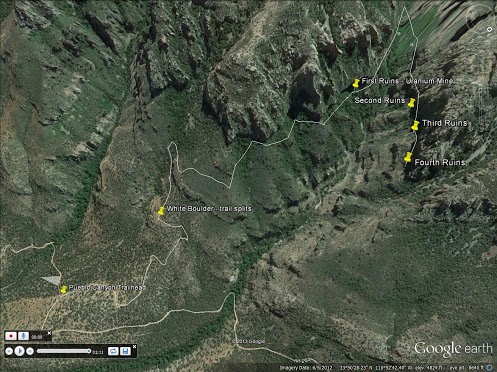 As you come around the point into the side valley that is Pueblo Canyon, you can see the ruins about midway up the far wall.  And you can see why you're making this crazy zigzag in the first place - there's no way up over there: 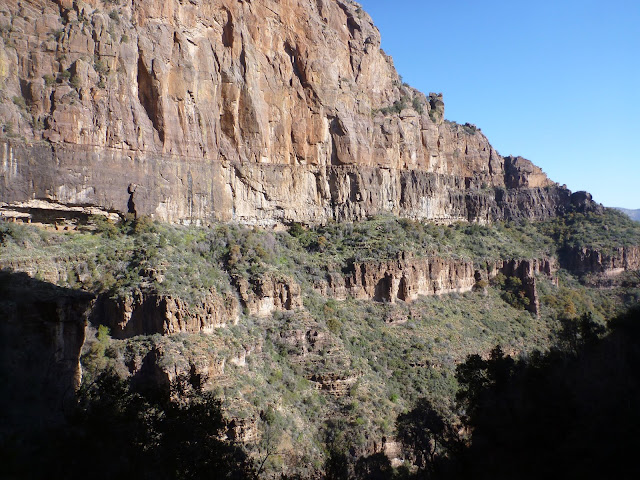 The bush-bashing happens in here - its scrambly, but just keep telling yourself that this is waiting at the end: 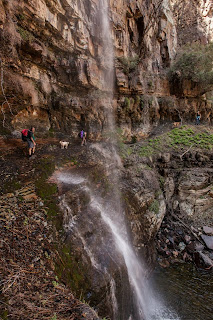 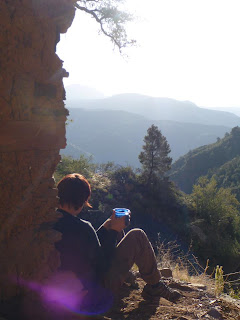 You don't really need a guide from here on out: there is one ruin on the southern wall (partially destroyed by a uranium mine) followed by a waterfall (apparently does NOT run year-round.  We took all our water and didn't need it, but someone we met on the trail said they'd been there when it was dry.  I reckon if you saw water on the road near the trailhead you're probably fine, but you have been warned.)  After the waterfall you come back along the north wall of the canyon and get to visit all the ruins you've been looking at for the last hour: 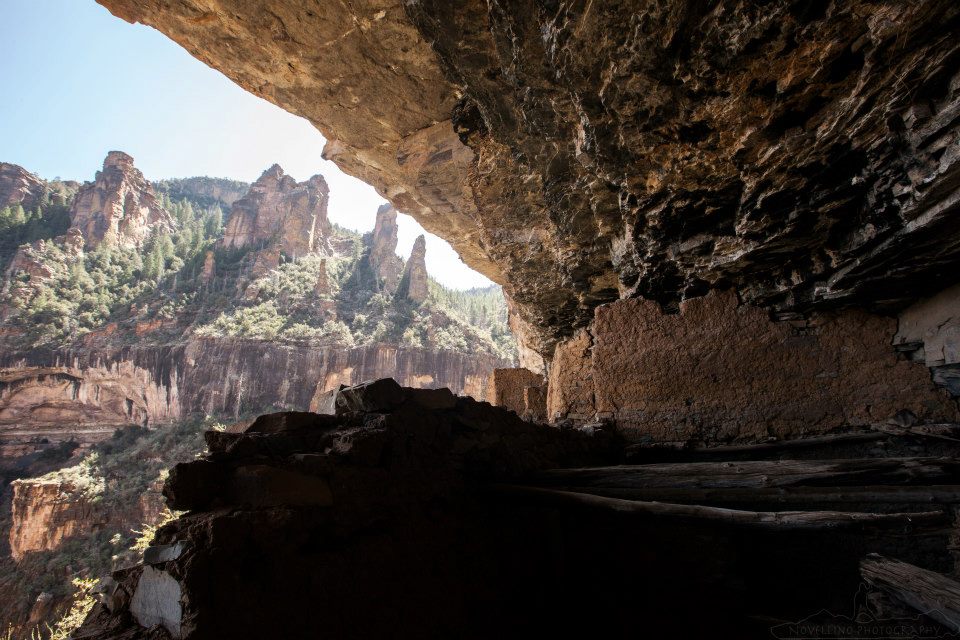